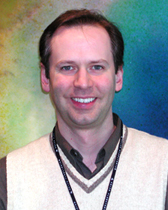 Michael Smutko teaches astrophysics and physics and manages the operations of the Dearborn Observatory. Since arriving at Northwestern in 2003, he has taught thousands of students in courses and hosted thousands more at observatory events.

Smutko worked for nearly a decade as an Astronomer at Chicago’s Adler Planetarium. Prior to that, he worked as a consultant and prior to that, he designed and constructed instruments for telescopes. In particular, Smutko is an expert in adaptive optics--a technique that removes the effects of atmospheric turbulence from ground-based telescopes in real time. Adaptive optics allows telescopes on the Earth to achieve images as sharp or better than telescopes in space for a tiny fraction of the cost of a space telescope. His current research is on the process of star formation and he is collaborating on infrared studies of high-mass star formation regions in our galaxy.

When not staring off into space, Smutko has given countless interviews for television, radio, and newspapers on the latest happenings in astronomy -- even though it means working with a cartoon robot every now and then.