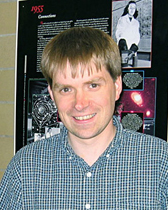 Dr. Andrew Rivers joined the Northwestern University Physics department in 1999 and has since taught a courses in physics and astronomy including the introductory physics sequence, Modern Cosmology, and Highlights of Astronomy. Andrew was awarded the Weinberg College Distinguished Teaching Award in 2008 and has been named to the Associated Student Government faculty-administrator honor roll 6 times. Andrew serves as a Weinberg College adviser and has been active in Northwestern's Residential College (RC) system, serving as Faculty Master of the Cultural and Community Studies RC from 2004-2009. He assisted in development of the Gateway Science Workshop program in physics and has worked on other curricular innovations within the Northwestern community. Andrew's Ph.D. research included a large scale radio survey of the so-called "Zone of Avoidance": his project revealed 20 previously unknown nearby galaxies.