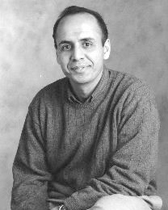 The primary focus of the Mesoscopic Physics Group is the study of small structures and devices; not small on the atomic scale, but small enough that coherent quantum effects can be observed.  This requires that these devices and structures be typically less than a micron in size, with the smallest features on the order of 10s of nanometers.  In order to fabricate these devices, we employ the techniques of nanolithography, using the electron-beam writer as well as the large range of fabrication equipment in our group.  This allows us to make complex, multilevel devices that combine normal metals, superconductors, ferromagnets and more exotic materials to study the interaction between fundamental phenomena on the nanoscale.  Some examples of such devices are shown here.

As the quantum coherent behavior of interest manifests itself only at the very lowest temperatures, we have a range of cryostats that enable measurements at temperatures all the way down to a few 10s of milliKelvin, in magnetic fields of up to 12 Tesla.  The unique capabilities of our group is in the range and flexibility of measurement tools at our disposal, and in the ability to make high-resolution, low-noise measurements.  In addition to electrical transport measurements, we also perform thermal transport, magnetometry, capacitance, scanning probe microscopy (which encompasses atomic force microscopy, magnetic force microscopy, electrostatic force microscopy and Kelvin probe microscopy) and ferromagnetic resonance.  A major focus is in the development of new instruments and techniques:  we are currently developing an entirely custom-built scanning probe microscope for operation at millikelvin temperatures, and microwave instrumentation for noise measurement and quantum manipulation experiments, also at millikelvin temperatures.

A long term research interest has been the investigation of the interplay between superconductors and other materials in hybrid devices, particularly the correlations induced in the electrons in these materials due to their interaction with the superconductor.  Earlier work studied quantum coherent electrical, thermal and thermoelectric transport and noise in superconductor/normal-metal hybrids, as well as the interaction between magnetism and superconductivity in ferromagnet/superconductor heterostructures.  Currently, we are looking at hybrids made from superconductors and thin films of transition metal dichalcogenides such as MoS2 and WSe2, where the presence of strong spin-orbit interactions leads to the locking of an electron’s spin to its momentum, resulting in topologically non-trivial electron states, and potential external control of spin-polarized currents.  Another current interest is in the properties of correlated electron systems such as the two-dimensional electron gas formed at the interface between complex oxides such as LaAlO3 (LAO) and SrTiO3 (STO), where the simultaneous presence of spin-orbit interactions, magnetic correlations and superconductivity result in the coexistence of competing and sometimes antagonistic physical phenomena, with often surprising results.