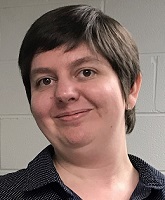 Professor Driscoll is a soft condensed matter experimentalist, and her research lies at the junction between soft-matter physics and fluid dynamics. The Driscoll lab focuses on understanding how structure and patterns emerge in a driven system, and how to use this structure formation as a new way to probe nonequillibrium systems. We study emergent structures in a diverse array of driven systems, from the microscopic to larger-scale. By developing a deeper understanding of patterns and structures which emerge dynamically in a driven material, we can learn not only how these structures can be controlled, but also how to use them to connect macroscopic behavior to microscopic properties.

Emergent structures often have their genesis in unstable interfaces, such as the droplets that appear on the rim of a splashing drop or the long drips that emerge from a painted wall.  Many driven fluid-fluid and fluid-suspension interfaces are unstable; the structures that emerge as they destabilize often reveal the dominant stresses acting on the system.  My lab looks at active and driven colloidal systems as well as fluid systems through the lens of structure generation. I use emergent structures as a probe for driven systems, which provides a way to both elucidate control parameters, as well as to  understand dynamics.

Another component of my research is understanding material failure via emergent structures.   How do soft solids fall apart and what kinds of patterns and structures are generated as these materials fail? When a rigid solid, like window glass, fails, it often does so rapidly and catastrophically.  In a special class of marginally rigid materials (very small shear modulus), the failure behavior is very different.  As the rigidity transition is approached, failure due to the application of uniaxial stress evolves from brittle cracking to system-spanning diffuse breaking; thus the spatial extent of the failure zone can be used as a direct probe for material rigidity. I use these sorts of model experimental systems to understand connections between material failure and microstructure, as well as to develop new ways to probe the rigidity of a broad class of soft materials.

The role of rigidity in controlling material failure