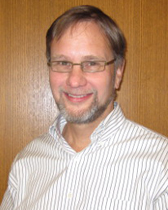 Michael Schmitt's research focuses mainly in two areas: 1) collider physics at the LHC, and 2) muon-to-electron conversion at Fermilab. He also has a small research effort in Type Ia supernovae.

Current projects include the measurement of the WW and WWW cross sections, both of which provide important tests of theoretical standard model predictions and which might provide evidence for new physics beyond the standard model. Schmitt's group is also exploring the very rare decay of Z bosons to four leptons (branching fraction on the order of a few parts per million) as another test of the standard model and a portal to new non-standard gauge bosons.

Schmitt serves as co-convener of the CMS SMP-Combination group whose mission is to extract values of fundamental constants from LHC measurements and to improve the knowledge of parton distribution functions for the proton.

The proposed high-granularity calorimeter is a revolutionary new device intended as one of the main upgrades for the high-luminosity LHC.  Schmitt's group has carried out the main investigations of the timing capabilities of this unique device; these capabilities will enable a much better rejection of unwanted energy depositions which otherwise will degrade the resolution of jet energies and missing transverse momentum.

Schmitt joined the Mu2e Collaboration in 2016.  His group is committed to providing an accurate and detailed map of the magnetic field needed for the detection of 105 keV electrons.  This map is based on Maxwell's equations and a new type of Bessels function; it uses thousands of Hall probe measurements made in a grid-like pattern inside the magnet.

Schmitt's Mu2e group has studied a potentially harmful background stemming from unwanted magnetic traps and also from pions that scatter in the Mu2e stopping target.  Currently they are interested in the μ‾→e+ conversion process.

CMS Collaboration, "Search for resonances in the mass spectrum of muon pairs produced in association with b quark jets in proton-proton collisions at √s = 8 and 13 TeV", arXiv:1808.01890