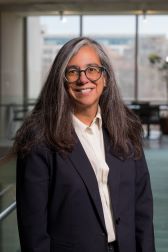 Mayda M. Velasco is a Professor in the Department of Physics & Astronomy at Northwestern University in Evanston, Illinois, and the Director of the international COFI Institute -- "Instituto de Cosmologia y Fisica de las Americas" in San Juan, Puerto Rico. She received her PhD from Northwestern University in 1995 based on experimental work performed to solve the proton spin crisis, as a member of the Spin Muon Collaboration at CERN. In 1996, she won a CERN Fellowship and later became a CERN Scientific staff. In that period, she was a member of the NA48 Collaboration, where she worked towards the understanding of the electroweak sector, and, in particular, the importance of CP violation in solving the mystery of the matter/anti-matter asymmetry of the Universe. She also formed and led the NA59 experiment at CERN, to develop the use of aligned crystals to produce linearly/circularly polarized photon beams starting from unpolarized electrons. She received a CERN Achievement Award before becoming a faculty member in the USA in 1999, where she won a Sloan Fellowship and a Woodrow Wilson Award (Mellon Foundation) a few years later. As a starting faculty, her research program focused on precision and high sensitivity measurements in particle physics ranging from ultra-rare neutral and charged kaon decays to possible precision measurements of the CP nature of the Higgs boson at a future Photon Collider. Her current research involves experimental studies of fundamental particles and their interactions using colliding particle beams. As a member of the CMS experiment at the Large Hadron Collider, she leads the effort of searches for very rare decays of the heaviest quark and the newly discovered Higgs boson. Through the years, she has served as the leader of various analysis groups and detector subsystems, like the coordinator for the Detector Performance Group of the hadron calorimeters at CMS.

Velasco serves in several boards, including the COFI board of directors, the High Energy Physics Advisory Panel (HEPAP) for the US federal government (starting in 2015) and the board for the CLIC-CTF3 facility formed by the CERN management. She has also served on several other review committees, panels and as a referee in the USA, Switzerland, Finland, Greece, UK, Denmark, and India, among others. Velasco has mentored more than 8 postdoctoral fellows and 15 MS and PhD students, 8 of them as a Northwestern University faculty. Four of the Northwestern students have already graduated -all but one are in academia. She has supervised the research project for more than 20 undergraduates since arriving to Northwestern University. Of those about a 1/4 were international students and about 1/4 were female students.