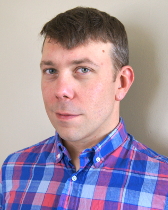 Kristian Hahn and his research group collect and analyze data from high-energy proton-proton collisions at the CERN Large Hadron Collider (LHC) in Geneva, Switzerland, with the Compact Muon Solenoid (CMS) experiment. Their research seeks to establish the origin and characterize the properties of Dark Matter, a substance that accounts for roughly 85% of the matter content of the universe.  As of today, Dark Matter has only been observed indirectly; its existence is inferred through its gravitational interaction with normal matter.  By contrast, Hahn's group searches for the direct production of Dark Matter in Run-2 of the LHC, which commenced early in 2016 at an unprecedented center-of-mass energy of 13 TeV.  The larger collision energy greatly extends the reach of searches for new physics, and may allow for the production of heavy mediating particles that connect Dark Matter to known particles.  In addition to the group's data analysis efforts, Hahn presently serves as co-convener of the LHC Dark Matter Working Group, which brings particle physics theorists and experimentalists together to guide the broad and systematic searches for Dark Matter conducted at the LHC.

The ultimate discovery potential of the LHC will be achieved in the era of high luminosity (HL-LHC).  CMS data rates will grow significantly, providing unparalleled sensitivity to rare DM processes and other new phenomena.  The key enabler of CMS physics goals at the HL-LHC is a cutting-edge, hardware-based data filter (a "trigger'') that can reconstruct the trajectories of charged particles ("tracks'') within microseconds.  Hahn's group is tackling the crucial challenges of data distribution and track reconstruction in the development and construction of the CMS track trigger.  His group is developing hardware algorithms that leverage the newly available tracking information to improve the acceptance of Dark Matter signal.  In addition to the group's hardware work, Hahn presently serves as co-convener of the CMS Phase-2 Track Trigger Working Group.