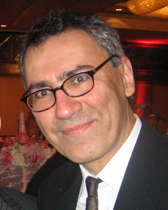 Teaching and Public Outreach
Public Lectures on the Web

Professor Zadeh attended SUNY at Stony Brook for his undergraduate studies in Physics, then attended Columbia University for his PhD in Astronomy. He spent two years at NASA's Goddard Space Flight Center working as a National Research Council postdoctoral fellow before joining the faculty of the Department of Physics and Astronomy at Northwestern University in 1988. Farhad's main interest is to understand the physical processes that take place in the nucleus of our galaxy.

The central few hundred light years of our Galaxy is unusually active compared to the neighborhood of the Sun, located 25,000 light years away from the center of the Milky Way Galaxy. A supermassive black hole is surrounded by hot young stars with powerful winds and radiation fields that irradiate the nearby interstellar gas.

Yusef-Zadeh's group uses high sensitivity and resolution of new astronomical facilities such as VLA, MeerKAT and ALMA (radio and submm interferometers), as well as other space-based X-ray and near-IR facilities like Chandra and HST to study the origin of the activity at the Galactic Center.

Three main topics that his group focuses on are: 1) multi-wavelength observations to monitor flaring activity of the supermassive black hole, Sgr A*; 2) the consequences of cosmic rays interacting with the gas in the nucleus of our galaxy; 3) how star formation occurs near Sgr A* where it is generally presumed to be suppressed by strong tidal forces in the vicinity of the supermassive black holes.

Flaring Activity of the Black Hole

Flares from the Black Hole Sgr A* flares four times daily in the IR with occasional simultaneous flaring in X-rays. The spectrum this optically-thin synchrotron emission, its polarization angle swings, and statistics of the peak flux distribution are well-studied, yielding information about the particle acceleration process and subsequent synchrotron cooling of the highest-energy particles. However, the size of the source region and hence the energy density of the relativistic particles and magnetic field are ill-determined. To investigate this, we have simultaneously been observing Sgr A* at multiple frequencies. A well-established expanding-synchrotron-source model explains the flaring at multiple frequencies. In this model, the flares are increasingly delayed in moving from 90 to 43 to 20 GHz, a characteristic of a transition from optically thick to optically thin emission as the synchrotron-emitting region expands, allowing the source's size, expansion speed, magnetic field strength, and plasma density to be determined.

A large number of radio sources in the Galactic center show radio emission arising from relativistic particles but the source of acceleration of these particles to high energies is not understood. The objective of this study is to understand the acceleration mechanism, the role of cosmic rays in the gas chemistry and how cosmic-ray particles drives the outflow observed at the Galactic center.

Star formation in the innermost regions of galaxies is generally presumed to be suppressed by strong tidal forces in the vicinity of the supermassive black holes. However, the discovery of O and B stars orbiting within 10" (0.4 pc) of Sgr A, has made it apparent that star formation has occurred within the last few million years. Indeed, the stellar population in the region indicates a continual low level of ongoing star formation for at least the past several hundred million years. The kinematics of the O and B stars suggest formation in a disk formed by the capture of a molecular cloud by Sgr A. Farhad studies the high density needed to overcome tidal forces to produce young stars near the black hole. In addition, he identifies signatures of on-going star formation in the last 100,000 to million years using a variety of radio and infrared telescopes.

This new service course for non-majors draws upon real-world examples from my own research interests to illustrate how image analysis is used to extract information in astronomy. One of the objectives of this course is to communicate that astronomical images obtained in different wavelength bands can be used as a vehicle to gain a better understanding of the physical laws. This course is designed for undergraduate non-science majors interested in learning astronomy through the manipulation of astronomical images of celestial objects. The IT group developed nine web-based homework assignments which are given to students once a week during the quarter. These assignments are as follows:

A collaboration between Farhad Zadeh and Pamela Bannos, who is a photographer and who teaches at NU, resulted in an exhibition at the Block Gallery. The IT department developed a website in collaboration with us. To learn more about astronomical images visit http://spaceimages.northwestern.edu.

Public Lectures on the Web

I have embarked on an outreach program of public lectures that has featured diverse and interesting topics with broad appeal to students and the public. These public lectures are videotaped and can be viewed on NU's department of Physics and Astronomy website here.

The topics of these lectures are as follows:

"The History of Physics: Paul Dirac -- A Beautiful Mind in the 20th Century"
Professor Laurie Brown

"Einstein and the FBI"
Fred Jerome

"The Birth and Death of Stars"
Professor Walter Lewin

"Asteroids: Their History, their Impact on Earth and their Complex Geology"
Professor Mark S. Robinson

Recent Work in the News