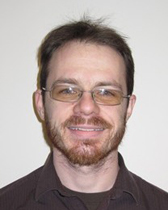 Prof. Eric Dahl and his group build particle detectors for the direct detection of dark matter. There is ample evidence that dark matter exists – its signature is seen on scales from single galaxies to the entire visible universe and across time from the cosmic microwave background (a snapshot of the universe at 400,000 years old) to the present day.  These gravitational effects, however, tell us little about the nature of dark matter itself.  We know only that it is 5x more abundant than the protons, neutrons, and electrons that make up normal matter, and that it cannot be composed of any particle we’ve identified in the lab so far.

Direct detection experiments look for interactions between the dark matter that surrounds us and the normal matter in specially designed detectors here on earth. Professor Dahl's group works specifically on searches for WIMPs (Weakly Interacting Massive Particles), a leading dark matter candidate that would interact with normal matter by scattering elastically off atomic nuclei, resulting in a ~10-keV nuclear recoil. Unambiguously identifying this rare signal amid the copious backgrounds produced by natural radioactivity is the crux of the WIMP detection problem. The Dahl group specializes in developing background discrimination techniques in large liquid-based detection technologies capable of the ton-year exposures needed to further explore the WIMP parameter space.

The PICO Collaboration (formerly COUPP and PICASSO) uses bubble chambers to search for dark matter at SNOLAB. Particle interactions in these detectors nucleate bubbles in a superheated liquid target, and the PICO chambers are tuned so that they are sensitive nuclear recoils from WIMPs but completely insensitive (at the 10-10 level) to electron recoils from beta decays and gamma rays. In our most recent (Feb. 2017) result the PICO-60 detector collected a 1.3 ton-day exposure on C3F8 with zero background, producing the world’s most stringent direct detection limit on the spin-dependent WIMP-proton cross section.  The next-generation PICO-500 experiment is supported by the Canadian Foundation for Innovation.

The LZ Collaboration is building what will be the world’s largest dual-phase xenon time projection chamber for dark matter detection.  This detector will have a 7-ton liquid xenon target and will run at the Sanford Underground Research Facility in Lead, South Dakota, with science operations beginning in 2020. Professor Dahl is currently the LZ Instrument Scientist, and the Dahl group works with Fermilab on the xenon handling and control systems safeguarding the >$10M payload of the experiment.  The Dahl group is also investigating the effect of rare electron recoil topologies on background discrimination in xenon TPCs.

The Dahl group is developing a new nuclear recoil detection technology that combines the extreme electron recoil rejection of the bubble chamber with the event-by-event energy resolution of a liquid scintillator. We have made the first-ever demonstration of simultaneous scintillation and bubble nucleation by nuclear recoils, in a 30-gram prototype xenon bubble chamber built and operated in our lab at Northwestern. We are currently investigating the low-threshold (sub-keV recoil) reach of this new technology and working to demonstrate the scalability of the technique.

The Dahl group is supported by the Department of Energy, Office of Science, under Award No. DE-SC- 0012161.