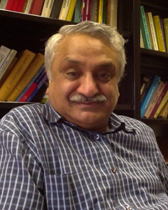 Anupam Garg's current research interests center around quantum phenomena involving the orientational degree of freedom of spin angular momentum. He develops the theory of magnetization dynamics of single molecule nanomagnets, where the spin is observed to tunnel through as many as twenty fundamental quanta. Current projects in this area include quantum phenomena at the single molecule level, as well as the collective and slow relaxational dynamics of many coupled molecules as in a solid.

Garg is also engaged in developing semiclassical methods for spin. These methods are of practical utility for many physical systems, including the molecular nanomagnets mentioned above, but they are also of intrinsic formal value. They are often based on the spin coherent state path integral, which poses mathematical challenges not encountered with Feynman's original path integral.