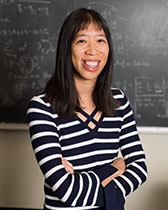 Long ago and far across the universe, an enormous burst of gamma rays unleashed more energy in a half-second than the sun will produce over its entire 10-billion-year lifetime.

After examining the incredibly bright burst with optical, X-ray, near-infrared and radio wavelengths, a Northwestern University-led astrophysics team believes it potentially spotted the birth of a magnetar.

Researchers believe the magnetar was formed by two neutron stars merging, which has never before been observed. The merger resulted in a brilliant kilonova — the brightest ever seen — whose light finally reached Earth on May 22, 2020. The light first came as a blast of gamma-rays, called a short gamma-ray burst.

“When two neutron stars merge, the most common predicted outcome is that they form a heavy neutron star that collapses into a black hole within milliseconds or less,” said Northwestern’s Wen-fai Fong, who led the study. “Our study shows that it’s possible that, for this particular short gamma-ray burst, the heavy object survived. Instead of collapsing into a black hole, it became a magnetar: A rapidly spinning neutron star that has large magnetic fields, dumping energy into its surrounding environment and creating the very bright glow that we see.”

Continue to the full article on Northwestern News.