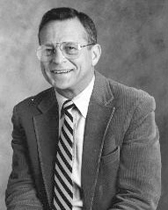 Robert Oakes is interested in several areas of particle theory. He has done calculations of the decay constants of beauty and charmed mesons that show that certain ratios of the constants are required to be unity within a percent as a direct consequence of only the general structure of the standard theory of quarks and leptons. He has studied heavy-quark systems (including rare decay modes) looking for possible mechanisms that might enhance their branching fractions over the Standard Model values. Oakes and his collaborators have also calculated the QCD supersymmetric and electroweak corrections to heavy-quark (beauty or top), Higgs meson, and sparticle (of supersymmetry) production in electron-positron annihilation and at hadron colliders. The corrections can be appreciable in certain interesting cases. Oakes has calculated the radiative decay rates of several heavy-quark states, specifically the charmed D mesons. The key to doing this is the heavy-quark effective theory that describes the nonradiative decays. Electromagnetic interactions are then introduced by gauging the effective heavy-quark interaction. Oakes has also developed an effective model for charmed-meson semileptonic decays and has predicted the branching ratios and polarization parameters for a number of yet-unmeasured processes. Most recently Oakes has focused on investigating processes relevant to the Large Hadron Collider and the International Linear Collider.